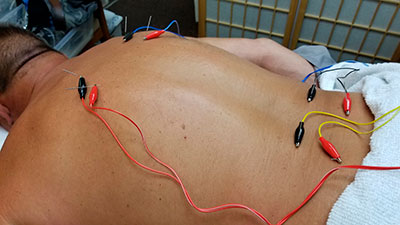 This is new technique that has only recently come into use. In old days doctors stimulate needles with their hands, sometimes up to 30 min to reach therapeutic effect. Today we can use machines.

WHAT IS THE DIFFERENCE BETWEEN ELECTROACUPUNCTURE AND TRADITIONAL ACUPUNCTURE?

Electroacupuncture is quite similar to traditional acupuncture in that the same points are stimulated during treatment. As with traditional acupuncture, needles are inserted on specific points along the body. The needles are then attached to a device that generates continuous electric pulses using small clips. These devices are used to adjust the frequency and intensity of the impulse being delivered, depending on the condition being treated. Electroacupuncture uses two needles at time so that the impulses can pass from one needle to the other. Several pairs of needles can be stimulated simultaneously, usually for no more than 30 minutes at a time.

Patients may experience a tingling sensation while being treated with electroacupuncture, which is most likely due to the electric current.